In this blog post we will provide a few insights on the architecture of the upday news app (both backend and frontend), focusing on the work that has been put on the resiliency and robustness of the components around the My News feature.

Before digging into the technicalities, it’s worth to spend a few words on what upday is and which responsabilities we have towards our stake holders.

upday is a fruit of a collaboration between Axel Springer and Samsung. The end result is a news application for Android, pre-installed as the default news-app on most of the Samsung devices (S7, S8, A series etc).

The one purpose of the application is to deliver relevant news content to the users. The goal is achieved by means of the two news streams that the app provides:

Collaborations with big players come always at a cost. For the engineering team at upday this cost is the Service Level Agreement that we need to commit to. So, when a problem with the service occurs, it’s categorized in a specific severity level that also defines then the actions to take. These are, in Layman’s terms, the 4 severity levels of our SLA:

Each severity layer requires different response times, from days (less severe) to minutes (most severe). That’s why at upday we try not to ever exceed Severity 3, for the sake of our sleep and nerves.

General Architecture For My News

Talking about our backend technology, we have always tried to structure our architecture in a Micro-Service oriented way. Sometimes we have services that are actually small and with contained use-cases, sometimes we build the Goldman Sachs of backends. The important thing is that each team has its own responsabilities and takes care of its own sh…tuff.
Therefore, each feature in the app has its own service or set of services, including Top New and My News. The outage of one does not imply the outage of the others.

Given that the focus of this article is the availability of My News (the most tricky maybe), we will start by giving a brief overview of the stream structure and the architecture involved in this feature.

The My News section in upday is a potentially endless scrollable list of full screen cards, each displaying the content of a news. A sample:

Using our terminology, a card is called a note and a whole stream of notes symphony. Each note has constraints about how to select an article for the symphony, so it basically defines a subset of all existing articles. A couple of examples: a note could be just about fresh main stream news, another note could identify all trending news.

Each note is built differently, some of them are even provided by specific micro-or-so-services. The whole My News stream is then, to some extent, very modular. Some notes are also not constrained by the user preferences (to provide a more serendipitous experience). 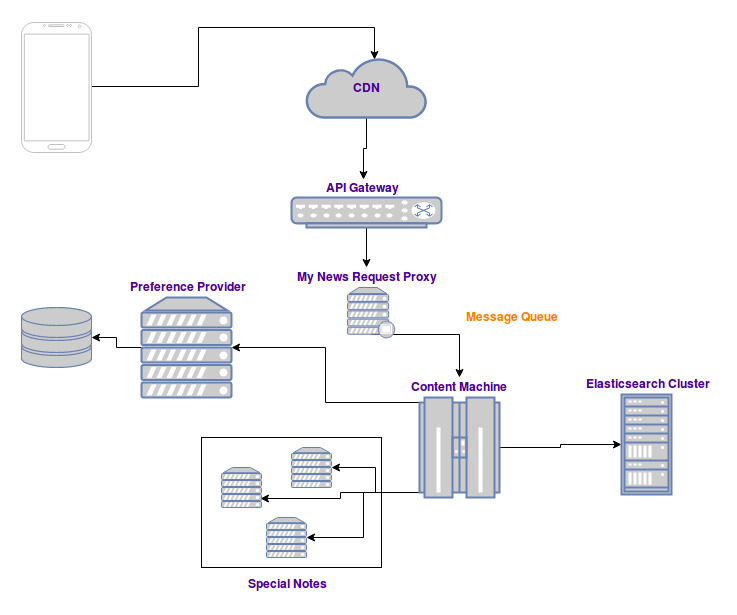 Quick overview of the responsabilities:

Our infrastructure is immutable and each component is autoscaled, so we will not go into the details of what happens if a developer shuts down a single instance (answer: nothing).

Each of these components could fail and will fail at some point. The challenge is to make sure that the user doesn’t notice or doesn’t get really annoyed.

We will see now what the failover mechanism in place for each of the surprises that Murphy has prepared for us.

As mentioned already, special notes define article subsets that are computed using specific technology. Our collaborative filtering note is, for instance, generated leveraging Apache Mahout. It happens that these components slow down or break once in a while, given their computationally intensive tasks and dependencies. 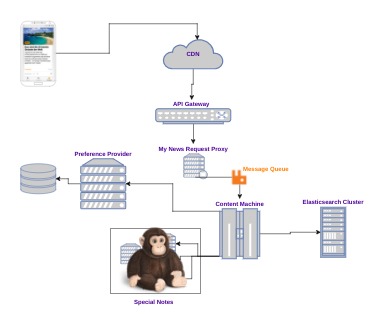 Although it’s quite a tough challenge to take down an Elasticsearch cluster, we still managed quite a few times to do it. AWS once had networking issues, hence the whole cluster has been partitioned away from the Content Machine. This basically means that the Content Machine is isolated from our content storage.
Mitigation: 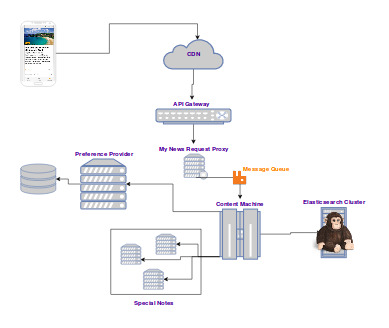 Severity level: 3-4 (for at least 30 minutes. Degradation might become more noticeable after a longer time)

By being an “online synchronous component” (the load is proportional to the traffic), sudden traffic spikes and slow autoscaling can make temporarily shake temporarily, with slow downs and unavailabilities. 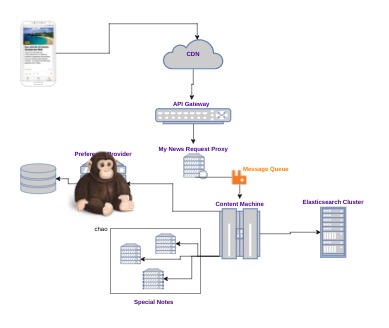 The RabbitMQ cluster has been configured for high availability. Yet, it happened that a misconfiguration in the maximum open files on conjunction with a huge traffic slash, made the cluster partially go down and brain split during a wrong recovery (worst weekend ever for the the guys on call). 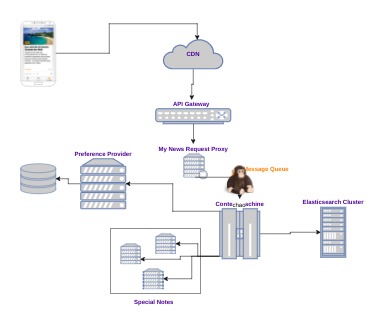 This component usually never fails, but when it fails, it fails epicly. It’s usually when the on call engineer start getting cold sweats. 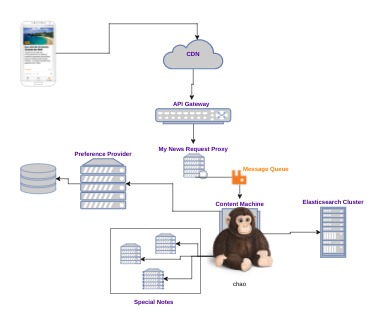 Sometimes the more external components go down (API-Gateway, My News proxy) or maybe there are even prolongued failures of multiple internal services. In these cases, there is not much to do if not praying… 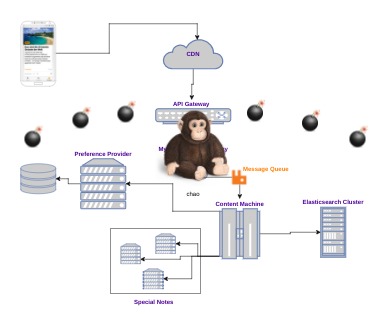 … it’s not true. It’s in these cases that the mother of all failovers kicks in. In order to give time to the ops to figure out the issue and fix it, the whole infrastructure is basically replaced. How? The solution below: 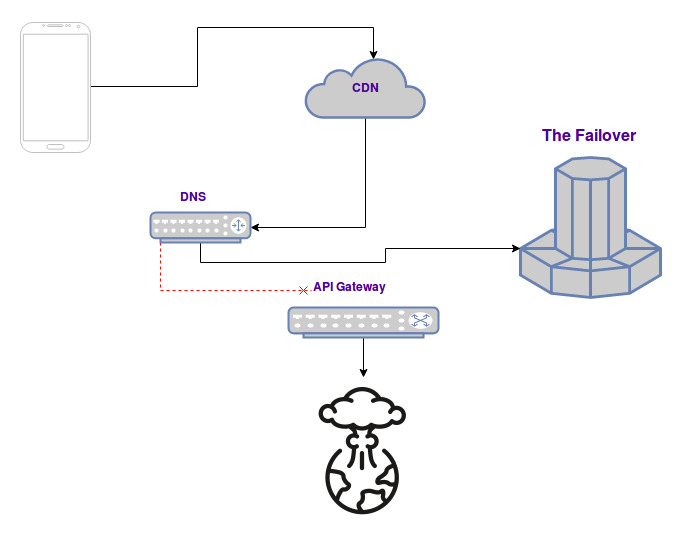 The A record of the DNS pointing to the origin (namely the API Gateway) is replaced with the IP of The Failover. This component has been built keeping the complexity as low as possible and loaded with monitors and alarms. Its only purpose is to fetch a bunch of symphonies periodically to be delivered as they are upon request. This usually gives us around 30 minutes to react and try to fix the issue, before most of the users start calling customer support.

Severity level: 3 (for around 30 minutes)

So far we never went beyond Severity level 3.

This is just an overview of how we partly manage our backend availability at upday. These are not the only measures that we use: many monitors and alerts (with Datadog btw) have been deployed, some of them give us early clues of potential future problems (for instance low heap space on some instances, load going above average…). This gives us the chance to address issues before they explode into minor or major outages.
On top of this, it’s worth mentioning the comprehensive amount of unit, integration and system tests that must be developed before any change can be deployed to production. Trust me: there would be a few outages per week if this would not be done. We are not in a condition where we can “simply hot fix production”.
This is also just the current stage of our system: as we started, we had almost nothing of this in place and failure by failure we became more aware of how careful one has to be when dealing with big stakeholders and micro services (pun intended). Now we can kind of sleep well… usually.

PS: bring it on, Murphy.

1: We didn’t actually use Netflix Chaos Monkey, but we developed a home-made solution by following their example.